Início/Winery/Region/The viticulture in the Alentejo 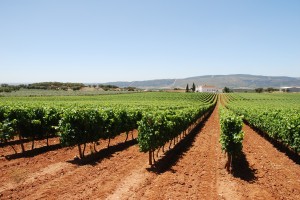 The Alentejo has a great aptitude for the production of quality wines. The hot sun in the summer, the dry and cold weather in the winter and the particularity of the soils create the perfect conditions to produce such wines. The land use for viticulture in the Alentejo is around 23,000 hectares (7% of the cultivated land area in the country), divided into 3140 agricultural exploitations with an average area of 5.4 ha per exploitation (as compared to 0.9 ha for Portugal as a whole).

The land use for viticulture in the Alentejo may appear small when compared to other regions in Portugal. This is due to the fact that the land in the Alentejo is concentrated in demarcated geographical areas. Viticulture in the Alentejo has been developed progressively through the active role played by the Cooperative Wineries in such a way that 90% of the winegrowers are associates of the cooperatives, representing a total of about 70% of the wine production in the region. This economic sector is very important for the region and its 3000 winegrowers.

Concerning viticulture Central Alentejo is the most important area as it includes the viticultural subregions of Borba, Redondo, Reguengos, Évora and part of Granja/Amareleja. The viticulture sub-region of Borba itself includes the municipality of Borba and part of the municipalities of Estremoz, Vila Viçosa, Elvas, Alandroal and Monforte.
The main orographic irregularities responsible for the microclimates in some of the areas are, from North to South of the region: Serra de S. Mamede (Mountain Range of São Mamede), 1025 m of altitude, Serra d’Ossa (Mountain Range d’Ossa), 649 m (with a direct influence in the Borba region) and Serra de Portel (Mountain Range of Portel), 421 m of altitude. Regarding hydrography the rivers Guadiana and Sado and their tributaries have a very important influence. The hydrographic situation is mainly based on the drainage basins of these rivers. And last but not the least the sub-rivers Caia, Xévora and Degebe, tributaries of the rivers Guadiana, Xarrana and Almansor also play an active role in the region’s hydrographic situation.

The viticulture areas of the Alentejo are situated on the Iberian-Mediterranean strip sharing the main Mediterranean characteristics with its important continental influences. For that reason springs and summers are particularly warm and dry, whereas winters are extremely cold. The annual average temperature is 15.5-16 ºC with an absolute maximum of 42 ºC and an absolute minimum of -5 ºC. The insolation level is particularly high (3000 hours/year) especially in the trimester before the harvest which contributes to a perfect maturation of the grapes that will later allow the production of high quality wines. These conditions are favourable for instance to the synthesis and accumulation of sugar and the concentration of the colouring substances in the skins of the grape berries. The annual average precipitation in the Borba region is 750-850 mm. The majority of the rain falls in the winter.

In the viticulture areas of the Alentejo the predominant soils are of granite origin with patches of decay products of schist and quartz diorites. Nevertheless, the Borba region is characterised by the dominance of soils directly or indirectly derived from crystalline limestone. In general terms these soils are of medium to low fertility but have very good natural drainage characteristics, which make them particularly suitable for the cultivation of ligneous plants.

Vineyards in the Alentejo are cultivated on the poorest soils of the region on slightly hilly terrains (except for the region of Portalegre) predominantly facing South.

The vast majority of the vineyards in the Alentejo are cultivated in an environment friendly way. Winegrowers apply the method of integrated protection which reduces the use of pesticides significantly, using as little as possible of the least toxic products.
The traditional orientation system is the low vine in trellies, with ascending vegetation, small and medium vegetative expansion, usually pruned in “bilateral string” or “double Guyot”.

The average production in the region varies between 35 and 40 hl/ha, whereas the maximum production, as defined in the statutes of the viticultural areas, is 55 hl/ha for red grape varieties and 60 hl/ha for white grape varieties.